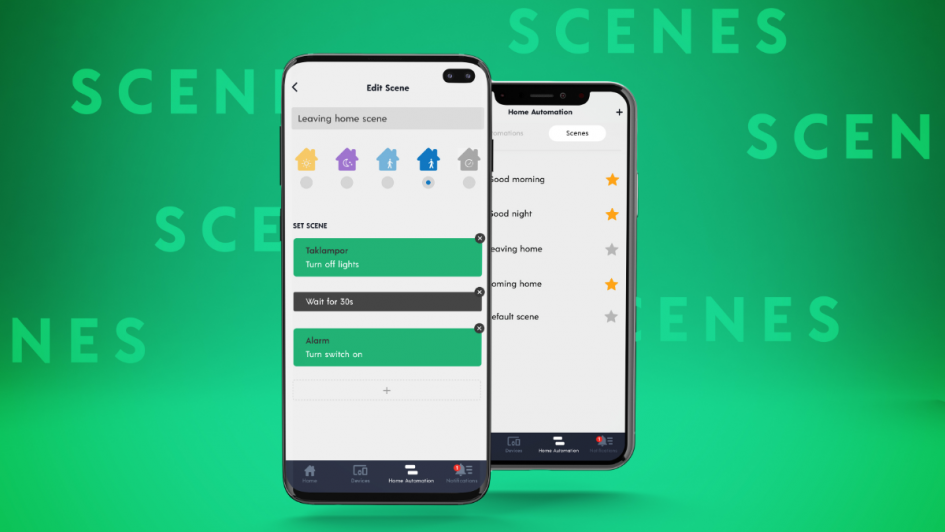 Animus Heart recently launched the major 2.0 update, also called ACRE. One of the amazing new features with this update is the addition of Scenes and the extension of the Automations tool. Scenes and Automations joined together in a new page called Home Automation.

Automations is your smart assistant in Animus Heart that helps you regulate and control devices in the home automatically. The rules for Automations are simple; A trigger starts the automation, but only if all the conditions are met, and then it executes the actions. They are built by the user in the Animus app or desktop view. A more in-depth article about Automations can be found here.

Scenes are similar to Automations in the sense that they make certain things happen in the home automatically. However, a scene only contains actions and the trigger is a manual button-press on the Dashboard.

How to add Scenes

Scenes are found in the Home Automation page. Scenes look a bit different on Desktop view compared to the app, but the same functions exist on both.

Default ‘dummy’ Scenes are created automatically for every new Heart installation. However the user needs to manually add actions to these scenes for them to do something.

Good Night – Scene that turns off all the lights in the home.

Leaving Home – Scene that can be used to activate any alarm-related automation and also turn off appliances/lights in the home.

Let’s Party – Scene that sets the mood for a party at home. Colored RGB lights can paint the rooms with beautiful color and music can play on the speakers.

Scene buttons on the Dashboard for instant trigger.

Continue to follow our blog and social media to gain new wisdom in the smart home. But also to receive new inspiration on how your smart home can become even better with Animus Heart.

We know many have been waiting for this, so wait n

Merry Christmas and best Wishes for 2021, with lov

The last, #homeautomation 7, of "Automation Week"

#homeautomation 6 of "Automation Week" is here. It